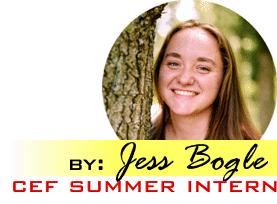 #cefjacksontn – Week 4 was another week where we were able to go into a few neighborhoods for pop-up clubs. Thankfully, we were a bit more successful in our attendance this week than in week 3.

On the first day, we only had two clubs because we did a special “party club” with Professor Poppy, a Christian illusionist, at a Boys and Girls Club. This took up most of our Monday morning. The kids at this location were a little rowdy, but they still heard the gospel several times between the illusions and our Bible story about Saul’s salvation on his way to Damascus.

Each afternoon, we partnered with the Salvation Army location at Allenton Heights. A couple days, we were informed no kids would show up, so we did not go. However, we had three days of ministry with several kids. The kids here loved dancing to our songs with us, even the sweet little girl who did not want to stay at first.

For Tuesday through Friday, we went to a couple other neighborhoods and had clubs there in the morning. Thankfully, we had a crowd each day. At our second location, the kids were eager and engaged. When they heard the story about Noah, they were standing up to get a closer look at the visuals we had. Maybe they originally came for the ice pops, but they left with more knowledge of the gospel and God’s word. They left having met people who loved them enough to stand in the heat with them and tell them how much God loves them.

At the end of the week, we were blessed to be able to host and attend a block party for the residents of Allenton Heights. T.C. Talley (Men’s Counselor at Birth Choice), Mark Cancia (Lieutenant for Salvation Army) and Jared Okoth (Missionary with Light of the Nations) spoke to the residents about their faith in Christ, and Completion 7 from Lane College blessed us with some songs to praise the Lord. Volunteers were there with a prayer tent, cooking burgers, chicken and hotdogs and handing out cool treats.

This week was a mix of ministry forms. It was hot and tiring, but we made it through, planting and watering some seeds along the way. We may never see these beautiful people again on this side of eternity, but I hope to see them again when we are all finally reunited.

Randy is the Executive Director for CEF Greater Jackson in West Tennessee. He is also the site administrator, former International missionary to Eastern Europe, and dedicated family man.